Our last release (about a week ago) included a number of improvements to student financials that we incorporated after taking in some good feedback from our customers. True to form, our customers had a lot to say about the new statements, and we're releasing some improvements to our improvements tonight. It's all in an effort to make a tricky lump of information easier to understand—for your staff and your students.

Here are the improvements we have slated for tonight's release:

We collapsed Pending Charges and Invoiced Charges into one concise panel on Student > Financial > By Term:

Invoice pages are even more detailed, now showing Pending Aid and a new invoice summary showing everything that affects the Amount Due:

You can manually apply Pending Financial Aid to invoices before you disburse it; when you do disburse the Aid, it hits invoices according to your selections: 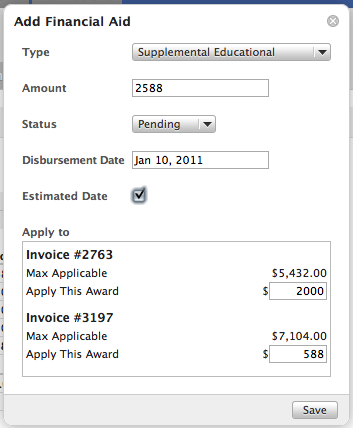 Pending Aid now factors into the Amount Due shown on Student Financial > Dashboard and By Term: 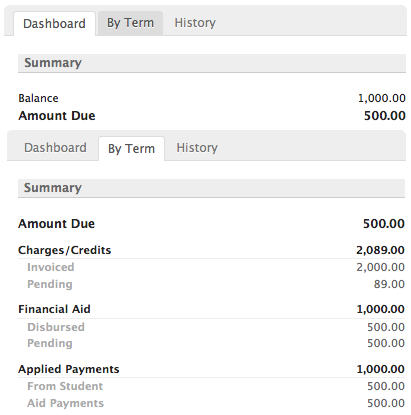 The Unpaid Invoices export now includes a column with Pending Aid for each invoice:

We added the ability to auto-apply Unapplied Payments & Credits when you issue a new invoice (and a Yes/No setting to enable or disable this behavior):

The net effect of these updates is to mitigate the confusion caused by having differing Amounts Due for the same student—which we acknowledge has been a real headache for some of our customers. We've been looking for a good way to show what a student needs to pay your school given the wrinkles caused by Term-specific charges, Term-agnostic charges, pending Financial Aid, Payment Plans, and so on. And we think we've found it; we're certainly happier with this arrangement than we've been with our past handling of this information.

So now the Amounts Due that you see will be the same numbers your students see when they go to pay with a credit card (oh, yeah, "Pay Now" will now also say "Amount Due" everywhere except when recording a payment). Here's an example: