A helicopter carrying a dinosaur

Maybe you've heard the basic "Startup-Takes-Venture-Capital" story. A new software company attracts VC funding, uses it to fuel meteoric user growth, uses that growth to attract more VC, and finally ends up cashing out—usually by selling—and leaving its users in the lurch. There's a lot that's worthy of commentary that often accompanies this storyline—slimy business decisions, a surreal easy-money culture, and a bewildering lack of profits—but the thing on our minds right now is stability.

Basically, this storyline rarely results in long-term, stable businesses. That's only one of several dozen reasons we never want to touch the stuff.

See, most of us are family men. Those of us who aren't yet are planning to be. When we say that we work here so we can support our families, part of that means getting home for supper every night. Our industry looks at that and sees a candle we oughtta burn at both ends. We'd rather have our kids look back on these years and remember how much time we spent with them.

Thus, our employees own a majority share in Populi (the rest is held by employees of the company that spun us off). Our business plan is designed to maintain or increase that stake. We're averse to outside investment of any flavor. We have no desire to sell the company. We seek steady, manageable growth over wild, stratospheric moonshots. That means we pursue certain customers and tell others that we're not right for them. Our workplace is intentionally designed without shackles on our desks.

Sound boring? Who cares? When your business is to help small colleges run themselves, who needs exciting? We're in a great position here: without outsiders with a narrow financial interest calling the shots, we can focus on our customers and get home in time to build Lego airplanes for the boys, to read the girls a couple stories, to unwind with the wife and a glass of red wine. Are we leaving money on the table? Who knows? We know what is on the table, though: dinner, at home.

But venture capital pursues excitement. It throws money at higher-risk investments that other investors won't back. It flings stuff at the wall just to see what sticks. It does this in the quest for an out-of-proportion payday; if it puts in a dollar, it'll want three or four or fifteen back this time next year. And it doesn't care what gets in the way of that. Alex Payne sums it up:

The funding for startups – that is, the money that pays your prospective salary – comes from somewhere. Wealthy individuals and institutions invest in startups as just another asset class. The futurist Bruce Sterling recently quipped that “start-ups are full of [young] people working hard to make other people rich – Baby Boomer financiers mainly”. While that might be an overly general and cynical take it’s by no means untrue.

In broad strokes and excluding areas like biotech, venture-backed startups are a machine into which relatively small amounts of capital are inserted in one side and, ideally, quite a lot more comes out the other… The salient point, though: what’s in the middle of the machine is you. You make it go.

The machine doesn’t care about you.

What would have to happen to Populi to make it happen for the VCs? Some of the possibilities: We'd have to surrender major product decisions. We'd have to change the direction of the service. We'd have to turn away smaller schools and go after the big ones.

We'd have to start eating supper at the office.

And if none of that worked—that is, if those changes didn't translate into Maybach money—we'd have to shop Populi around to companies looking for something to buy. Whatever the case, we'd have a new, alien pressure on us to satisfy the demands of something that's invested neither in our families nor our customers, but solely in getting a lot more out of us than it ever put in.

Think of it this way: If we took VC, we'd be like a helicopter carrying a dinosaur: unstable, nervous, and one thin strand away from dropping a big oily brontosaurus on everyone.

Who's invested in your company? That's who your company has to serve. That's why the only investment we're after is from ourselves and from our customers.

More free file storage for everyone!

About this time a year ago, we dropped the price on file storage from $2.50/GB per month to $1/GB per month. In the tradition of doing cool stuff with file storage during the Summer Term, we're pleased to announce that...

You might've guessed as much from the title of this post, but it seemed worth repeating. Every Plan is getting its free file storage limit upped. Small goes from 10 free gigs per month to 50, Medium goes from 50 to 100, and Large goes from 100 to 200. This applies to all of our current customers and anyone else who has yet to jump aboard with Populi. Using Populi to store and deliver your video and audio lectures and materials now makes even more sense.

Know what else is cool about this? Our Plan pricing is remaining the same. So, all those extra gigs-per-month really are just plain ol' free.

This change is effective as of immediately. That extra file storage is yours to use right now!

Populi's course Roster tool lets you manage every aspect of your course's enrollment. In one place, you can see every student connected with that course instance—including enrolled, auditing, withdrawn, incomplete, and waitlisted students. It also gives you a quick rundown of key stats for your enrolled students, such as credits, attendance figures, and grades.

The Roster automatically updates with every registration event tied to that course instance. If your students enroll online, it's instantly reflected here—and you can also use the Roster to register enrolled and auditing students:

Once they're enrolled, you can manually adjust any aspect of that enrollment. Change the credits/hours, set up individual students for Pass/Fail, and if you use attendance hours, you can update the automatically-calculated figure here:

If twelve students sign up for a course with ten seats, you'll see the extra two students on the Waiting List. Edit the List to change the order of preference for enrollment:

When your incomplete students have completed their work, you can enter their grades and send them on their way: 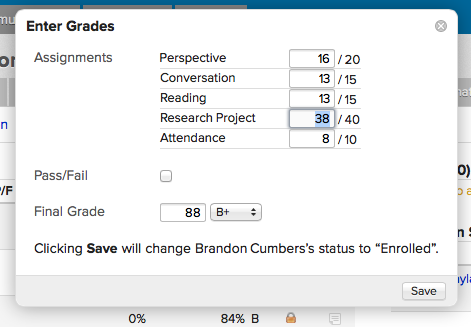 You can leave general notes about any of your students; these are available to faculty when entering final grades and preparing course comments:

Plus, there's the usual round of communication and export tools—email all your students, or create a PDF or spreadsheet of the Roster:

Out of the box, Academic Admins and Registrars can do anything with any course's Roster, while Faculty have more circumscribed permissions. But some of our schools need their faculty to do more, so there's also a setting that enables faculty to enroll students:

Populi's course Roster gives you one simple and convenient tool to stay on top of all the registration details that are so important to running your school.

Five years ago today the first user logged in to Populi. Here are some "since-then" stats to mark the occasion.

Thanks to all of you for an awesome first five years. Let's see what we can accomplish in the next five!

Live chat: now in all your Populi courses

Plus, full LTI capability and other improvements

New in Populi courses: live chat! Now your instructors and students can converse in real-time right in any Populi course. Chats let you embed images (even from Instagram), videos from YouTube and Vimeo, documents from Scribd, and even use emoji characters. They're easy to set up: just schedule one and everyone in the class—students, auditors, profs, teaching assistants—can join the conversation. 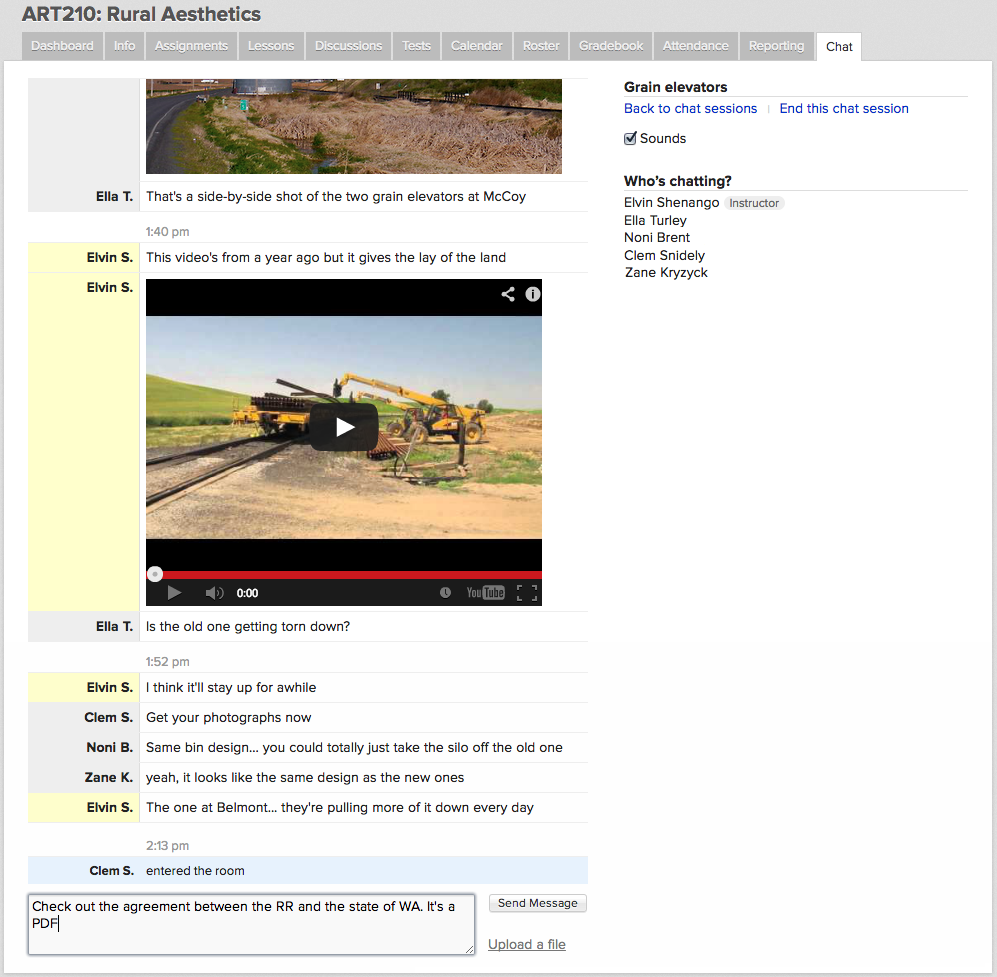 To use chat, the course instructor just needs to click Chat and start a new chat session. There's nothing to set up or figure out—it's live and ready to go in every Populi course.

A few months ago we added some basic LTI functionality, letting you link Populi courses to Moodle (or any other LTI-capable LMS). We beefed this feature up in two key areas:

Read more about it in our Knowledge Base.

Here's some other stuff we released recently:

The Data Slicer has a few new reporting options:

The Degree Audit now shows incomplete courses in the "not completed" view.

Course evaluations have a new faculty visibility option: Available after 60% completion and course is finalized.

Custom transcripts can now include course comments and progam-based honors (contact support if you'd like us to update your transcript template).

A story about breaking a habit

We recently began publishing weekly release notes in our Knowledge Base. Each week we post a list of Features & Improvements and Bugfixes that have gone live on our customers' sites. The list will capture everything we release, from the big to the small, from the really cool to the kinda mundane, from the hotshot new feature to the fix for that dumb ol' bug.

We haven't been very consistent with release notes over the past year. If you checked the dates, you'd be forgiven if you thought we hadn't done anything to Populi between March 2012 and April 2013. Of course, that's not the case. We've been very busy (and we remain so). But we've let detailed release notes fall by the wayside.

That happened because we changed how we develop and release new stuff. We used to save up a pile of things and dump them out onto Populi's servers during the wee hours of the night, all at once. This lent itself well to big blog posts and release announcements in the Knowledge Base. But now we develop, test, and release features and fixes individually*—it's a much better system that lets us be more agile and responsive in our development and support. But, it doesn't lend itself to the big announcement too well—after all, who wants a million posts about individual bugfixes?

For whatever reason, that notion of the Big Announcement stood in the way of actual communication for about a year. Something dumb like that shouldn't get in the way of getting the work done, but that's what it did. One day early in April, however, I (the writer) had a DUH moment: the Big Announcement isn't the only way to communicate about releases. So I started compiling the week's releases in a digest post in the Knowledge Base. No need for a big to-do: all our customers need is a regular update about what's new and what's been fixed. Small, quick posts: problem solved.

The takeaway from all this relates to something we wrote awhile back...

...software (like any tool) creates habits in its users—especially software that makes you do too much work. These “habits” aren’t limited to individual users, either: sometimes, entire schools shape policies and institutional workflows around the limits of what their old system could do.

Populi sometimes disrupts how a school runs itself because schools have adapted to their old software. And, it turns out, we did things a certain way because of how our old software "trained" us to inform customers about new releases. But our new development protocol obviated the need for the old "big-announcement" strategy. It was a minor disruption, but one that nonetheless affected our transparency and communication as a company.

And as it happens, the solution was incredibly simple: stop thinking in the old ruts.