We were unable to secure sufficient funding in order to properly scale the business, and our endeavors to find a new home for Everpix did not come to pass. At this point, we have no other options but to discontinue the service.

By all accounts, the site and service provided an elegant solution to a common problem: how to store, organize, and access years' worth of digital photos from myriad sources. Everpix stored them all on the cloud and gave users a simple interface to manage them. But as good a product as it was, it simply failed to gain traction. Casey Newton's post-morten at The Verge reports that "the company had attracted fewer than 19,000 signups". Some 6,800 of those were paying customers, plunking down $4.99 a month or $49 a year for the paid version.

In the company's final months, company founder Pierre-Oliver Latour made the rounds among the venture capitalists. He sought another $5 million to follow up on the initial $2.3 million he'd raised during Everpix' nonage—which sum the company had burned right through. In a telling paragraph, Newton reports:

In meetings on Sand Hill Road, Latour says, nearly everyone expressed enthusiasm for Everpix's product. But one by one, they turned him down. After two meetings with one well-known firm, a partner sent Latour an email. "You guys seem to be a spectacularly talented team and some informal reference checking confirmed that, but everyone here is hung up on the concern over being able to build a >$100M revenue subscription business in photos in this age of free photo tools." Said a partner at another firm: "The reaction was positive for you as a team but weak in terms of whether a $B business could be built."

Everpix, not holding the possibility of doing billion-dollar—or even a paltry hundred-million—business, was thus refused five million semolians by the VC's. Which well they should have. Only suckers go for an investment that gets you less than a 2,000-percent return.

In time, Latour hopes, the lessons of Everpix will become more clear to him. Where had it all gone wrong, exactly? Maybe there was something obvious that everyone had missed.

Maybe the Everpix guys could have taken a look at their expenses. Their Profit & Loss statement:

Everpix was spending money like there was no tomorrow. Which, as it turned out, there wasn't.

To be clear, we're sympathetic to the Everpix guys. No one wants to see their work up and vanish like that. What we're looking askance at is the culture that killed it. The company raced through its cash with such abandon that it must've been planning on either more funding or an acquisition. And when it came to that time, turns out the VC's wouldn't lift a finger for anything less than a nine-digit payday. Not a thought given to long-term sustainability or the preservation and improvement of what they had built.

The ones who put up the money are the ones who own your work. If you want it to last past tomorrow, make sure they're as invested in it as you are.

Free education for everyone

Higher education in the United States is overpriced and plagued by ever-increasing costs—and the government funding that makes it so widely available is perpetually endangered. What's more, the very best professors at colleges and universities around the country are limited to teaching a few hundred students at a time, at the most. There's a real danger, therefore, of a good college education becoming the province of an elite, wealthy few.

The Massive Open Online Course, or MOOC, puts courses from top universities and professors online and makes them available to any number of students—sometimes hundreds of thousands at a time—for free. MOOCs address the money problems by being more scalable and less expensive to deliver than campus-based courses. They give professors access to a wider variety of students by an order of magnitude. And students get to take them for free.

So anyone with a reasonable internet connection—whether rich or poor, fat or skinny, elite or hoi polloi, American or from somewhere else— can sign up and take one and change his future.

Companies offering free online courses for anyone must be driven by some lofty ideals. Here's the "Vision" blurb for Coursera, the MOOC company that gets the most press:

We believe in connecting people to a great education so that anyone around the world can learn without limits.

Coursera is an education company that partners with the top universities and organizations in the world to offer courses online for anyone to take, for free. Our technology enables our partners to teach millions of students rather than hundreds.

We envision a future where everyone has access to a world-class education that has so far been available to a select few. We aim to empower people with education that will improve their lives, the lives of their families, and the communities they live in.

Our mission is to bring accessible, affordable, engaging, and highly effective higher education to the world. We believe that higher education is a basic human right, and we seek to empower our students to advance their education and careers...

...We are reinventing education for the 21st century by bridging the gap between real-world skills, relevant education, and employment. Our students will be fluent in new technology, modern mathematics, science, and critical thinking. They will marry skills with creativity and humanity to learn, think, and do. Udacians are curious and engaged world citizens.

If you have high-minded ideals about giving away free coffee, you still need three bucks to buy that latté you want to give away. Same goes for high-minded software companies.

Coursera recently raised $43 million from a crew of venture capitalists and investors, bringing their total funding, as of this writing, to $65 million. Venture dollars fuel most of the rest of the MOOC "space", too: Instructure includes a MOOC-hosting platform as one of its services, which it developed with the help of $39.1 million; Udacity does what Coursera does, and is in hock for a comparatively modest $20 million. EdX, FutureLearn, and any of a half-dozen other entities looking to get into MOOCs are similarly propped-up by massive investments from universities, private individuals, and other investors.

All that money for companies that give away their core product.

However much they might have signed on to the lofty ideals, the VC's aren't looking to write off those millions as charitable donations on their taxes. Business plans of some sort are in order. Here's how these companies have contemplated making money from free online courses for anyone:

How's free education for anyone adding up?

The jury is still way out as to whether MOOCs are a worthwhile way to teach anybody anything. In January of this year, San Jose State University announced a big collaboration with Udacity to offer low-cost MOOCs for remedial courses; by June, it suspended the collaboration owing to "disappointing student outcomes". The preliminary data on completion rates indicates single-digits for a lot of MOOCs. On the money side of things, Georgia Tech's excursion into a MOOC-based MS in Computer Science encountered little in the way of cost savings. Coursera started offering certificates of completion, realizing that there's little incentive for a student to finish a course without some kind of carrot on the end of the stick.

"We were on the front pages of newspapers and magazines, and at the same time, I was realizing, we don't educate people as others wished, or as I wished. We have a lousy product."

Udacity, shepherd of curious, engaged world citizens who are taking hold of the basic human right of higher education, is getting into vocational training in a big way.

Over the past year, Udacity has recruited a dozen or so companies, including Autodesk, Intuit, Cloudera, Nvidia, 23andMe, and Salesforce.com, which had sent a couple of reps to discuss a forthcoming course on how to best use its application programming interface, or API. The companies pay to produce the classes and pledge to accept the certificates awarded by Udacity for purposes of employment.

Udacity won't disclose how much it is making, but Levine of Andreessen Horowitz says he's pleased. "The attitude from the beginning, about how we'd make money, was, 'We'll figure it out,'" he says. "Well, we figured it out."

Thrun, ever a master of academic branding, terms this sponsored-course model the Open Education Alliance and says it is both the future of Udacity and, more generally, college education. "At the end of the day, the true value proposition of education is employment," Thrun says, sounding more CEO than professor. "If you focus on the single question of who knows best what students need in the workforce, it's the people already in the workforce. Why not give industry a voice?"

If anything needs a voice, it's industry. It's high time someone took a stand for industry. And what about those high ideals from the vision statements, that free education for people who can't otherwise get at it?

The San Jose State pilot offered the answer. "These were students from difficult neighborhoods, without good access to computers, and with all kinds of challenges in their lives," he says. "It's a group for which this medium is not a good fit."

So, then, who are these MOOCs for after all?

Although Thrun initially positioned his company as "free to the world and accessible everywhere," and aimed at "people in Africa, India, and China," the reality is that the vast majority of people who sign up for this type of class already have bachelor's degrees...

…and are already being considered for employment by Google, Salesforce, Autodesk, and others.

The only truly galling thing about MOOCs is the puffed-up idealism and rhetoric that accompanies them wherever they go. The technology is admittedly complex and impressive, and there's no doubt ways for colleges and universities to meaningfully incorporate some of it into their online offerings. But the techno-utopians, venture capitalists, and attention-hungry professors framed higher education's problems in a particular way so as to pose MOOCs as the one-stop solution.

Would their basic assumptions hold up under any kind of scrutiny?

What if higher education's problems don't come down to issues of costliness? What if it's not all about professors who want access to ten-thousands of students? What if a university degree isn't simply a token to a higher-paying job?  What if college isn't a basic human right? What if education is more than just putting free content in front of a student?

Applications are going to be so stupendously better in the new Admissions that you'll wonder how you ever did without them. A new application designer, a preview tab, online references, better integration of application data, HTML embed codes… plus a lot more. Check out the video below for an overview of how they work, and how your existing applications will be moved over to the new format.

The upcoming Admissions release changes a number of things. One big change: the Prospect role will be replaced by the "Lead" designation (which is not a user role!). Leads will have different statuses that let you track where exactly they are in the application process. This video gives you a run-down of those statuses and how they'll work for you.

The Customizations tab gathers together a number of high-level settings from throughout Populi in one location, including:

...plus a few other things.

The new Appearance tab gives you a few more options for personalizing your Populi header. 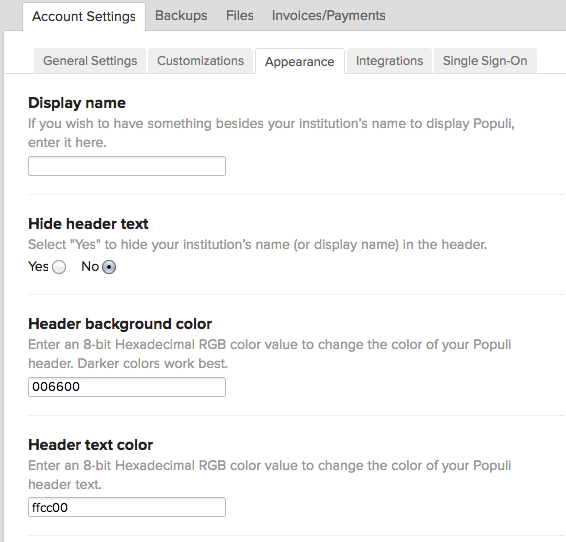 The new tabs organize some of the big-picture Populi settings right in one spot. We hope this makes our Account Admins' workdays just a little bit easier!

Big changes are coming to Admissions