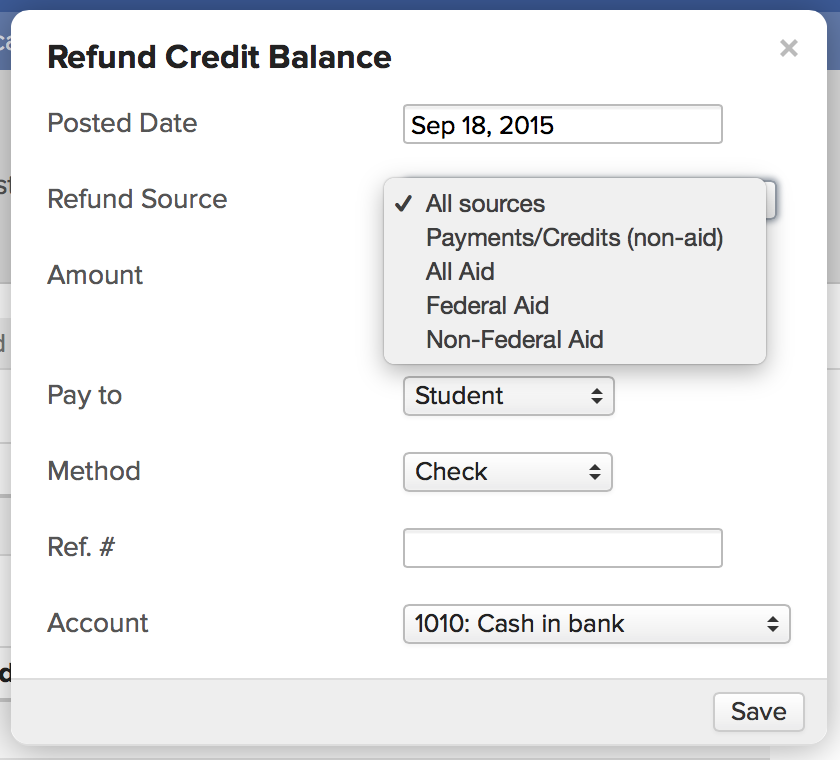 A new setting now lets Student Billing and Financial Admin users refund financial aid to students. When you check Yes on the new setting, the Refund to Student workflow is folded in under your options in the new Refund Credit Balance workflow on Profile > Financial > Dashboard. An additional new setting lets you configure your Aid Refund Policy—if you need to combine aid refunds with regular credit balance refunds, for example, you now have that option.

The new setting is a one-way, opt-in setting; once you enable it, you're upgraded to the new, improved workflow (for keeps!). It's a considerable improvement to the old batch workflow, and it will definitely take some work off your Financial Aid department's desk. Read about it in the Populi Knowledge Base. 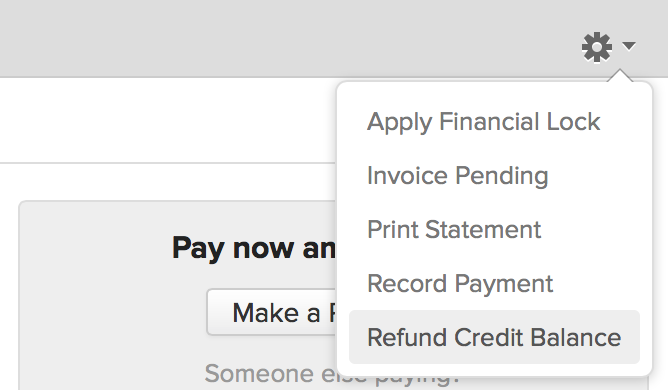 With all this talk of a new Refund Credit Balance workflow, we thought it'd be helpful to tell you what we're talking about.

Formerly, non-aid refunds to students were handled as an outgoing payment. There were some problems with this. For starters, most folks didn't think to look for the refund workflow under the Record Payment option. It also only let you refund regular payments—it didn't touch aid refunds to students, which are handled by many schools' student billing departments.

The new Refund Credit Balance option now appears whenever the student has something refundable—an unapplied payment or credit, or unapplied aid (if you've updated the aforementioned setting). The steps are just the same as the old workflow, with numerous provisions for the Aid Refund Policy setting. It's more intuitive, and what's more, the option only appears in the actions menu if there's something refundable on the student's account. It's an improvement not just for Financial Aid, but your Student Billing office as well. Read more about the new Refund Credit Balance workflow.

The Disbursement batch workflow setting lets you specify which comes first: disbursing aid to students or drawing down the funds from the aid source. If your school is required to disburse-then-draw-down for Federal aid awards, you can now set up your batch workflow to follow the same steps in the same order you do.

Fee rules let you set up conditions that automatically trigger a fee when a student enrolls in a course. You can target them at things like enrollments, audits, campuses, custom info, and so on.

Handy as they are, fee rules haven't always proved flexible enough to target complex situations. It was pretty difficult, for example, to make a fee trigger when students in the Graduate program enrolled in LIT576 at either the Springfield Campus or the Urbana Campus—such either/or situations required multiple fees with different rules.

Our new fee rules (just released last night!) handle these situations with aplomb. Rules now exist within rule groups; you can have multiple rule groups for each fee. Rule groups include an "any/all" selector that lets you specify your conditions with greater clarity. If you use multiple rule groups, you can easily set up conditions that bill students who "all fit this situation and either this or that other situation". That means it's now simple to set up a fee that triggers when an Undergraduate student enrolls in 1 to 18 credits at either the Portland Campus or the Online Campus (like the above image).

In addition to rule groups, we've added new rules that let you distinguish between all of a student's enrolled units and those enrolled units that match your other conditions. To learn more, check out our detailed Knowledge Base article that describes how fees work.

Here are some of the other financial improvements we've released in the recent weeks and months... 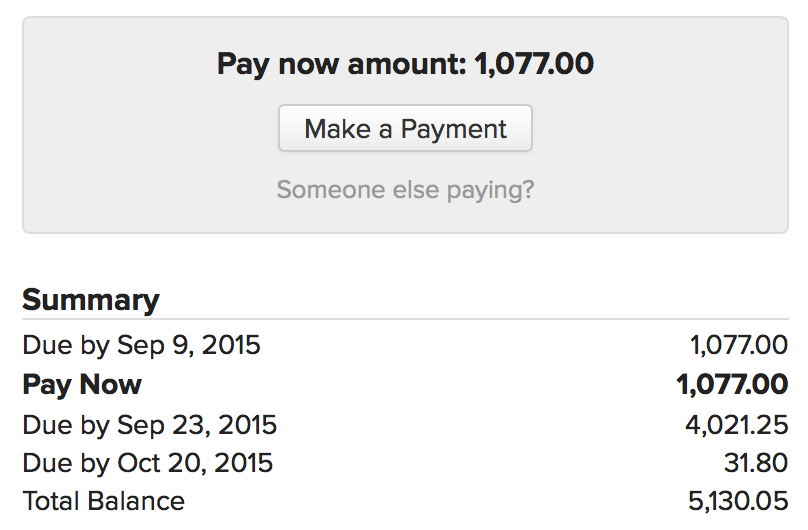 The student's financial dashboard summary is now headlined by a big fat Make a Payment button that shows the student's amount due (plus any overdue amount). Upcoming payment due dates (whether for invoices or payment plans) are clearly lined out together with any pending financial aid payments.

Lots of people asked for this: you can now edit invoice due dates! Just go to the invoice's info page and click the pencil next to the due date in the right column.

Last May we added the ability to set up recurring donations and payments. A recent updated gives you more options for managing those payments. You can now change the amount, schedule, and payment details on both the payer's profile and the Recurring Payments/Donations reports.

Academic Auditor role, plus some other new academic features

We're pleased to announce the release of the Academic Auditor role. Academic Auditor gives the user read-only access to all academic information in Populi—everything from student records to reports to Advising to the course catalog. An Academic Admin can give the new role to anyone they wish, and you can read about its permissions in the Knowledge Base. Our users have been clamoring for a role with these abilities, and we're really happy to get it out to everyone.

A couple other notable academic features have made it out into the wild the past few weeks. First, School Closures! You can now add holidays and closures to your Academic Years. When you do so, Populi will automatically block out course meeting times for those dates. Likewise, you can also add Library Closures in Library > Calendar—these closures postpone resource due dates and other time-sensitive Library features.

The other one: assignments and attendance for auditing students. Some schools let their auditors receive grades and feedback on coursework, and others like to include them when taking attendance. With the new Auditors setting (in Course > Info), you can now set your courses to allow Faculty to give assignment grades and take attendance for Auditors. 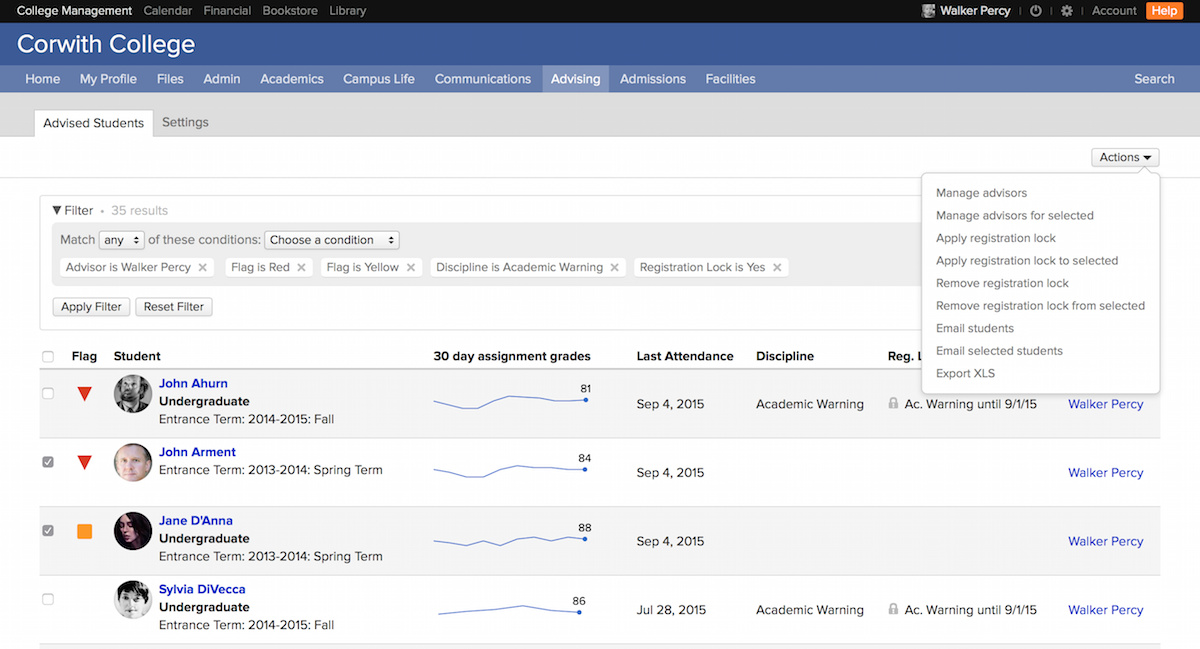 We're pleased to announce Populi's new Advising features. They include a new report, new advising workflows, and an academic warning system. Let's have a look...

The new academic warning system lets you set up thresholds for red, yellow, and green flags based on course attendance and grades. For example, if a student has three or more consecutive absences, he'll get a red flag. If his average assignment score from the past 30 days is in the mid-70's, he'll get a yellow flag. If in the next 30 days he pulls that average up to 90%, the yellow flag will flip to green. Advisors can ask Populi to send an email when one of their students gets a red or yellow flag.

Advisor activity, which used to be focused on the Profile > Advisor tab, now starts in the new Advising tab. Advising includes the Advised Students report and Settings, where you can set up the new academic warning system. Academic Admins, Registrars, and Advisors can all access the Advising tab. The Advised Students report gathers relevant academic information about your students: 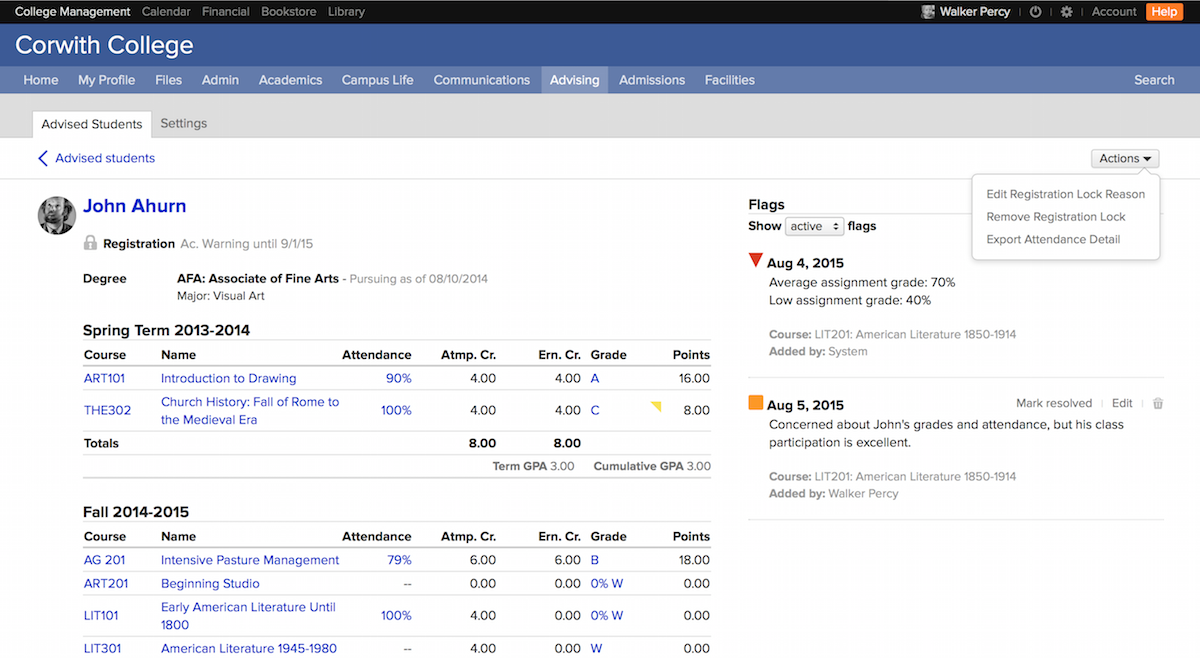 The student advising view includes an enhanced transcript tool and a summary of the student's academic flags. 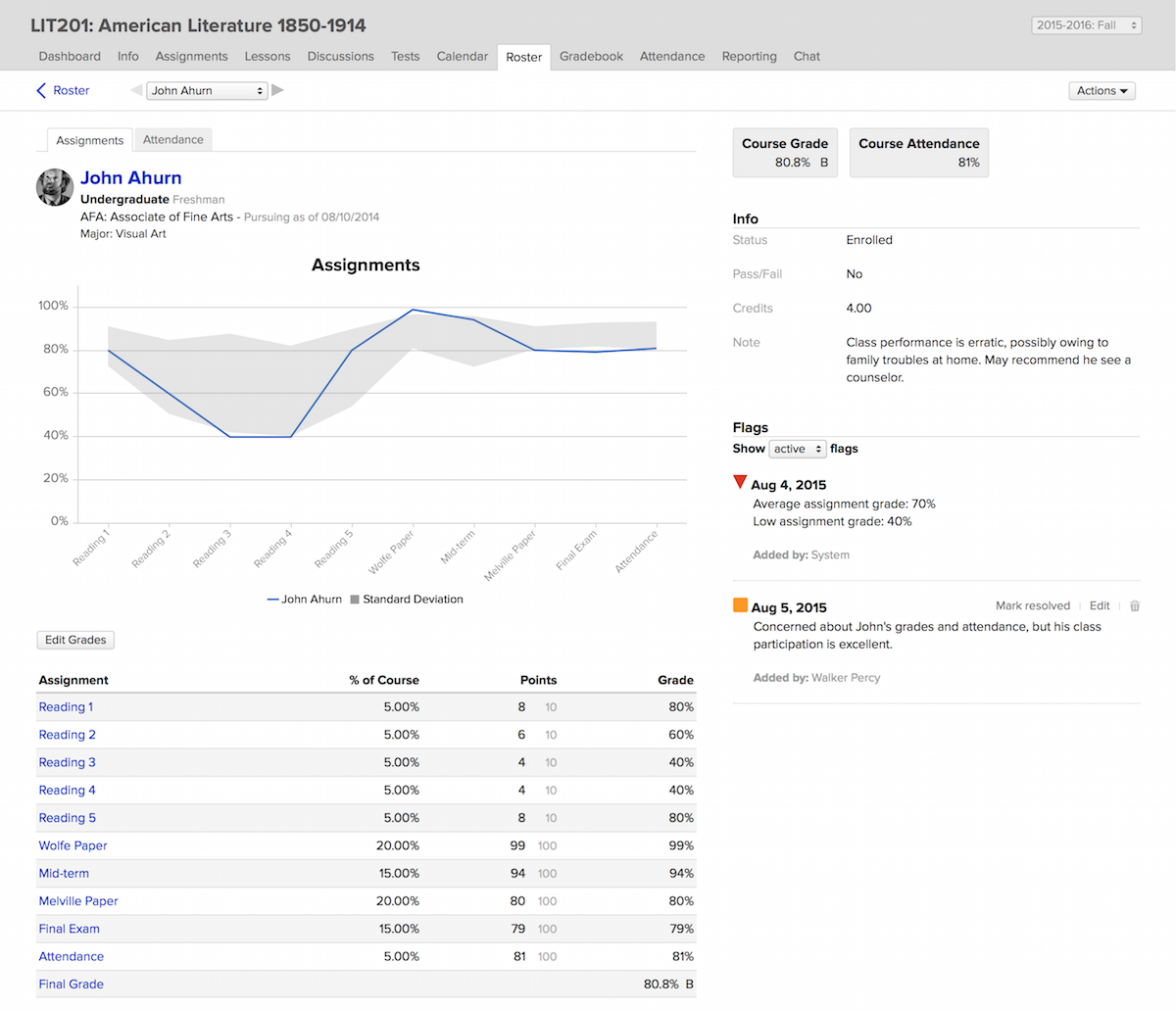 The student course summary is accessed through the course roster. It lets faculty, advisors, and registrars drill down into the student's grades and attendance and manage the student's flags for that course.

Together with the big-picture features, you'll notice a few more options for adding registration locks, adding and removing Advisors, and contacting students. We think these new tools will really help your Advisors guide your students through their time at your school, and we're happy to get them out to you. Learn more about the ins-and-outs of the new stuff in the Knowledge Base.

As far as I can make out, "efficiency" means that we ought to discover everything about a machine except what it is for. - G.K. Chesterton

Aurora Bedford writes about the phenomenon of "more efficient" website workflows that nonetheless flummox users who are used to more complex, "inefficient" versions of the same tasks:

...it’s common for many websites and applications to try to reduce the amount of steps—often, clicks—that a user must do in order to complete a task. However, interaction cost is more than just the number of clicks (or other physical actions)—it also involves mental effort. There are times when focusing purely on the number of steps actually backfires: instances when users are so accustomed to the “inefficient” process that streamlining it is perplexing and breaks the task flow.

Bedford recounts the example of an Email Settings form with no Save button:

What is missing from this otherwise fairly standard form? There is no Save button! How do we apply our changes so they are saved in the system? Computer-savvy readers may realize that the form is likely saving any changes whilst they are made, thus gaining efficiency by not requiring an extra save button press. However, most users are not this savvy, and even the savviest amongst us are more used to the pattern of having a Save or Submit button at the end of a form. This is an excellent example of how even the smallest deviation from a standard can cause confusion and increase cognitive load.

I recently encountered this myself when trying to post an image to a blog hosted by Squarespace.

The title was easy enough to place. And if I wanted to write, I would just click in that text area with the two gray blobs and start typing. But how would I post an image? I hovered over the text area:

Hm. Okay. None of those look like the usual add media options. See, I'm used to Wordpress; it's far and away the most common blogging tool out there (it runs this blog, for one). And for all of its various irritations and flaws, its WYSIWYG editor is unambiguous when it comes to uploading media:

I scrutinized the Squarespace interface, even going into the blog's settings to see if I needed to somehow enable images. Nothing worked. Finally, I clicked the Help link and searched their articles for How to post an image. This article enlightened me. Turns out I needed to start by clicking one of those gray blobs:

From that point on, posting the image was simple and straightforward. But to get to that point, I had to jettison everything I know about adding an image to a blog post and learn how to use an idiosyncratic interface element I've never seen anywhere else.

...users spend most of their time on other sites... When reaching your site, they expect it to function in the same way as on those other sites—any slight deviation from their norm snaps them out of autopilot and forces them to think and try to find an action that matches this novel situation.

How does this dynamic work with Populi? What expectations do people bring to our software? Here are a few things we've learned and observed...

Good software is built on a basic empathy for the user. Usually that means that we reduce complexity and pare things down to their simplest, most efficient expression. But people are complex, and we can't just mechanically assume that software simplicity begets efficiency. Hopefully, we'll always keep learning this lesson.

After all, software is for humans, and humans are not for software. 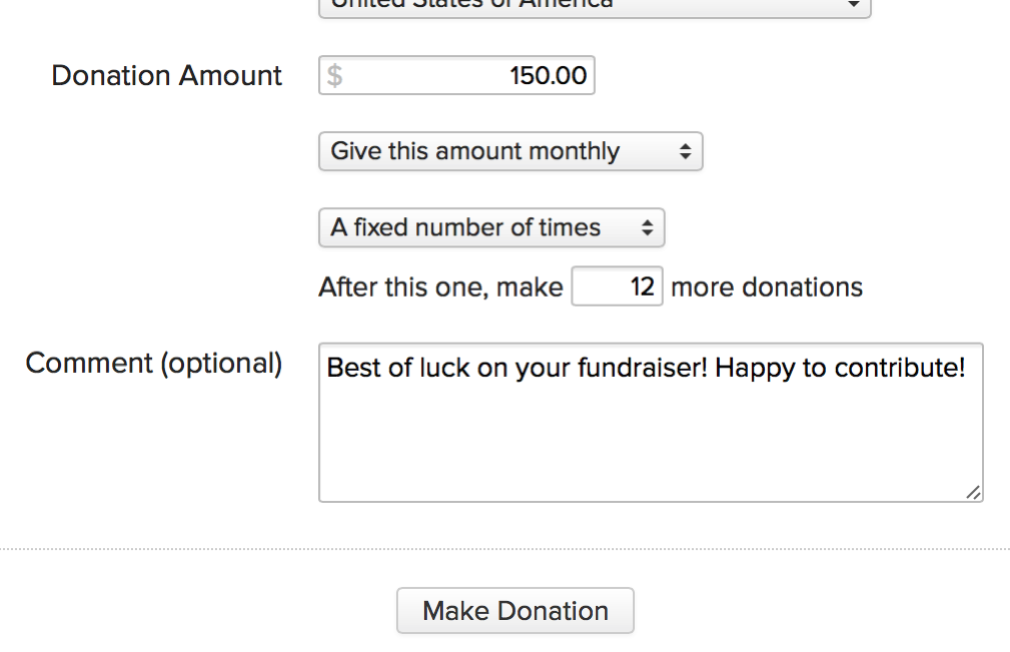 It works with both credit cards and echecks processed through Stripe. To get started, just set up a Stripe payment gateway in Financial > Settings and check off the steps listed in this article.

After enabling recurring donations and payments, donors and payers will be able to select whether to make a one-time or recurring monthly payment. To help you keep track of recurring payments, the new Recurring reports in Billing and Donations show you all the details, including amounts, timeframes, and payment methods. You can also manage a person's recurring payments on their Profile > Financial page.

We're really excited about what Stripe integration lets us offer our customers: easy signup, recurring payments, and better, more straightforward pricing than the other processors—2.9% + 30 cents for credit cards, 0.5% + 25 cents for eChecks. To get the most out of online payments in Populi, go to Financial > Settings > Payment Gateways and set up a Stripe account. It's easy to sign up and easy to try it out!